Aviation is one of the fastest rising sources of carbon emissions from transport, but can a small Canadian airline show the industry a way of flying that is better for the planet?

As air journeys go, it was just a short hop into the early morning sky before the de Havilland seaplane splashed back down on the Fraser River in Richmond, British Columbia. Four minutes earlier it had taken off from the same patch of water. But despite its brief duration, the flight may have marked the start of an aviation revolution.

Those keen of hearing at the riverside on that cold December morning might have been able to pick up something different amid the rumble of the propellers and whoosh of water as the six-passenger de Havilland DHC-2 Beaver took off and landed. What was missing was the throaty growl of the aircraft’s nine-cylinder radial engine.

• Norway’s plan for a fleet of electric planes

In its place was an all-electric propulsion engine built by the technology firm magniX that had been installed in the aircraft over the course of several months. The four-minute test flight (the plane was restricted to flying in clear skies, so with fog and rain closing in the team opted for a short trip) was the first time an all-electric commercial passenger aircraft had taken to the skies. 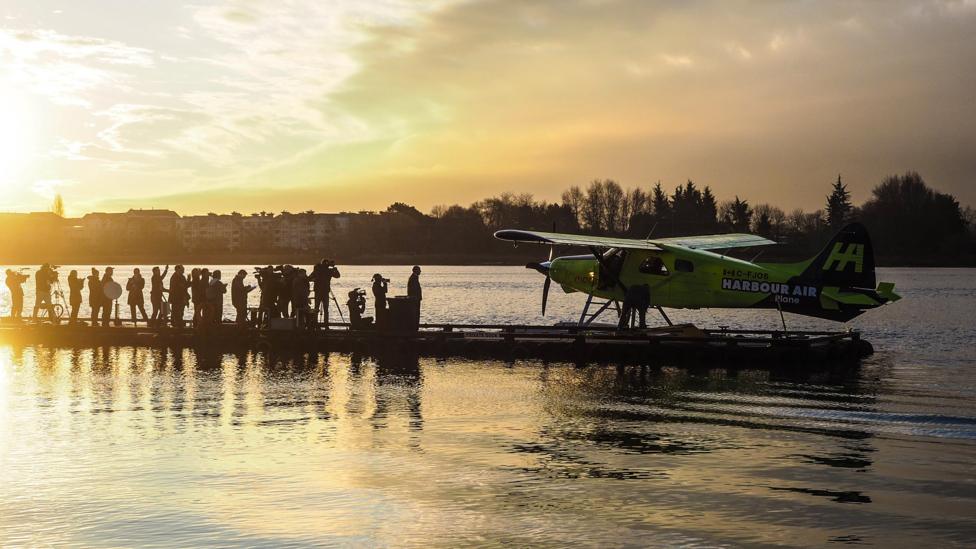 The retrofitted de Havilland DHC-2 Beaver took off from the Fraser River in the early morning light for a four minute test flight (Credit: Diane Selkirk)

“It was the first shot of the electric aviation revolution,” says Roei Ganzarski, chief executive of magniX, which worked with Canadian airline Harbour Air Seaplanes to convert one of the aircraft in their fleet of seaplanes so it could run on battery power rather than fossil fuels.

For Greg McDougall, founder of Harbour Air and pilot during the test flight, it marked the culmination of years of trying to put the environment at the forefront of its operations.

Harbour Air, which has a fleet of some 40 commuter floatplanes serving the coastal regions around Vancouver, Victoria and Seattle, was the first airline in North America to become carbon-neutral through offsets in 2007. A one-acre green roof on their new Victoria airline terminal followed. Then in 2017, 50 solar panels and four beehives housing 10,000 honeybees were added, but for McDougall, a Tesla owner with an interest in disruptive technology, the big goal was to electrify the fleet.

McDougall searched for alternative motor options for a couple of years and had put the plan on the backburner when Ganzarski first approached him in February 2019. “He said, ‘We’ve got a motor we want to get certified and we want to fly it before the end of the year,’” McDougall recalls.

The two companies found their environmental values and teams were a good match and quickly formed a partnership. Eleven months later, the modest Canadian airline got what McDougall refers to as their “e-plane” off the ground, pulling ahead of other electric flight projects, including those by big-name companies Airbus, Boeing and Rolls-Royce. 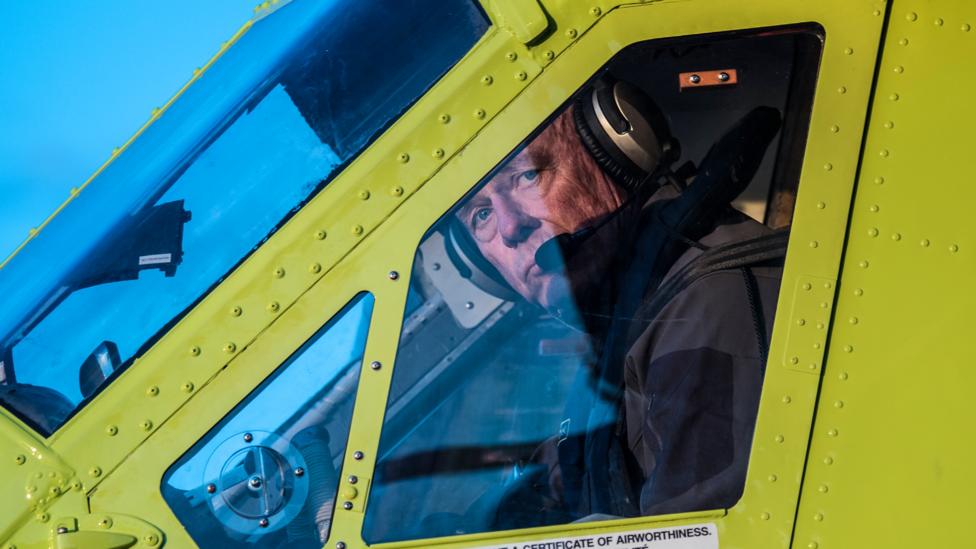 The project came together in record time considering how risk-adverse the aviation industry is, says McDougall. “Someone had to take the lead,” he says. “The reason I live in British Columbia is because of the outdoors: protecting it is in our DNA. When it came to getting the benefits from electric flight it made sense for us to step in and pioneer the next step.”

As the threat posed by the climate crisis deepens, there has been renewed interest in developing electric passenger aircraft as a way of reducing emissions

Electric flight has been around since the 1970s, but it’s remained limited to light-weight experimental planes flying short distances and solar-powered aircraft with enormous wingspans yet incapable of carrying passengers. But as the threat posed by the climate crisis deepens, there has been renewed interest in developing electric passenger aircraft as a way of reducing emissions and airline operating costs.

Currently there are about 170 electric aircraft projects underway internationally –up by 50% since April 2018, according to the consulting firm Roland Berger. Many of the projects are futuristic designs aimed at developing urban air taxis, private planes or aircraft for package delivery. But major firms such as Airbus have also announced plans to electrify their own aircraft. It plans to send its E-Fan X hybrid prototype of a commercial passenger jet on its maiden flight by 2021. But only one of the aircraft’s four jet engines will be replaced with a 2MW electric motor, powered by a combination of an onboard battery and generator attached to a turboshaft engine, which still uses fossil fuels, inside the fuselage. Most electric aircraft to have flown to date have been small light aircraft rather than those designed to carry passengers (Credit: Getty Images)

This makes Harbour Air something of an outlier. As a coastal commuter airline, it operates smaller floatplanes that tend to make short trips up and down the coastline of British Columbia and Washington State, which means its aircraft can regularly recharge their batteries. The company sees itself in a position to retrofit its entire fleet of floatplanes and make air travel in the region as green as possible.

This could bring some advantages. The efficiency of a typical combustion engine for a plane like this is fairly low – a large proportion of the energy from the fuel is lost as waste heat as it turns the propeller that drives the aircraft forward. Electrical motors have fewer moving parts, meaning there’s less maintenance and less maintenance cost.

Erika Holtz, Harbour Air’s engineering and quality manager, sees the move to electric as the next major aviation advancement, but warns that one stumbling block has been the perception of safety. “Mechanical systems are much better known and trusted,” she says. In contrast people see electrical systems as a bit unknown – think of your home computer. “Turning it off and on again isn’t an option in aviation,” she adds.

But it’s the possibility of spurring lasting change in aviation that’s made working on the Harbour Air/magniX project so exciting for Holtz. Aviation technology has stagnated over the past decades, she says. “Although there have been incremental improvements in certain technologies, there hasn’t been a major development change in aviation in 50 years.” 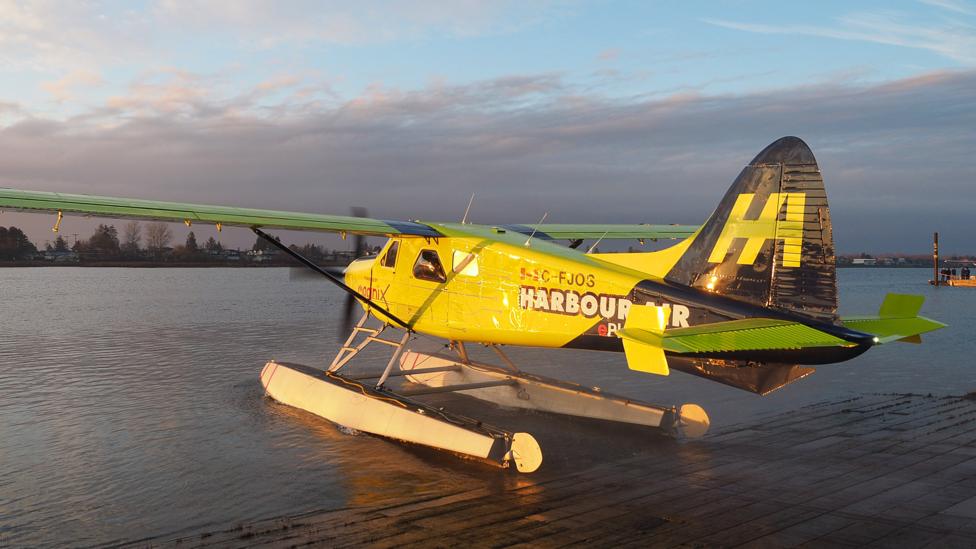 Batteries still cannot compete with aviation fuel for the amount of energy they hold per kilogram, but electric motors are more efficient (Credit: Diane Selkirk)

One area that requires further development is battery capacity. Many experts doubt that large fully electric passenger airliners will be available any time soon – current battery technology simply does not offer as many miles per kilo compared to aviation fuel.

Harbour Air’s short-distance flights on small, single and twin engine planes have lower power demands which mean they don’t need heavy batteries. “Most of our routes are within the range of technology that exists today,” McDougall says.

This ability to use existing technology, including the 62-year-old Beaver airframe and the Nasa-certified lithium ion batteries, means the certification process to meet the Federal Aviation Agency and Transport Canada requirements is expected to be easier than it would be with a plane built from the ground up.

Harbour Air hopes to get paying passengers in its eplanes in under two years. “Canada isn’t always known as an innovation centre,” says Holtz. “It’s very regulated and aviation itself is very regulated. But Transport Canada has been trying to help us get through hurdles instead of putting them up.” 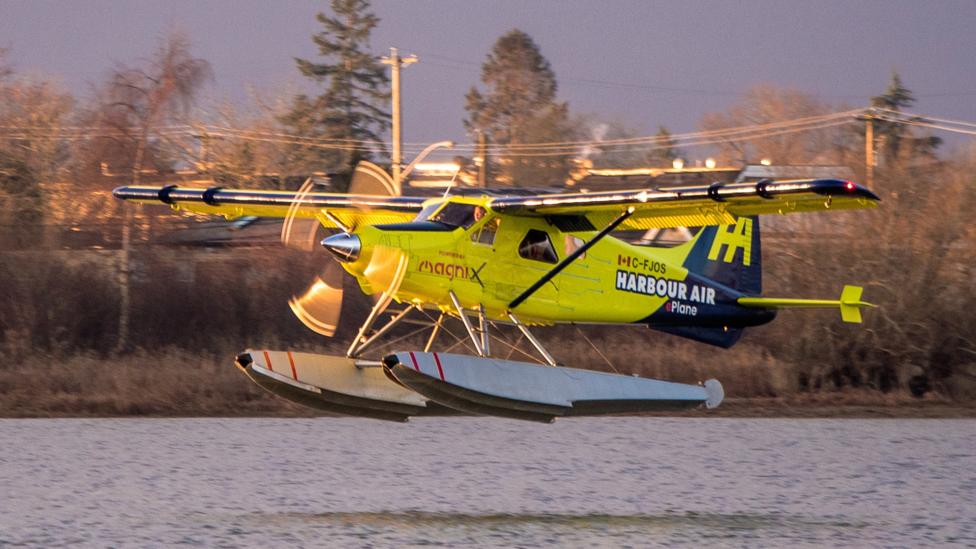 Harbour Air has plans to electrify its entire fleet of small passenger seaplanes, putting it ahead of other airlines (Credit: Diane Selkirk)

But Harbour Air’s efforts to electrify their fleet are unlikely to have a major impact on aviation emissions.

“Two to 12 passenger aircraft are only a tiny fraction of global aviation emissions,” says Lynnette Dray, senior research associate at University College London’s Energy Institute. “Even looking at all scheduled flights under 500 miles (which are performed by many sizes of aircraft, most of which are much bigger than two to 12 seats), less than 10% of global scheduled passenger fuel use and CO2 emissions can be substituted.”

Where Dray sees the Canadian airline having a bigger impact is with public perception. “There’s a lot of value in getting prototype models to market so that the technology has a chance to become familiar and trusted,” she says.

Blazing a trail for other electrical aircraft projects has been a major goal for Harbour Air and magniX. According to the The International Council on Clean Transportation, aviation contributes an estimated 2.4% of global carbon emissions with 24% of global passenger transport-related CO2 being attributed to flights originating in the US. This should be a strong motivator for change, says Ganzarski.

“I think the idea of electric aviation – getting rid of emissions and lowering operating costs – is something that the worldwide community should embrace,” he says. “The more companies get into it, the better. But we’ll be there right in front, leading the way.”

The emissions from travel it took to report this story were 4kg CO2, travelling by bus, train and car. The digital emissions from this story are an estimated 1.2g to 3.6g CO2 per page view. Find out more about how we calculated this figure here.