What is a Dead Zone & How are they Caused?  Something Fishy Here!

Excellent article simplifying what Dead Zones really are and how they impact us – from ModestFish. https://modestfish.com/

Known as places where most sea creatures can’t survive, what exactly is a dead zone? And how are they caused?

In this article, I’ll discuss with you, in plain English, exactly what a dead zone is, how they’re caused, and the impact they can have on the environment.

Scroll down to start reading, or jump to a specific section by clicking one of the links below:

Part 2: What causes a dead zone?

Part 3: What impact does a dead zone have on the environment?

Part 4: Where are the dead zones around the world?

Part 5: Can dead zones be revived?

What is a Dead Zone?

– “Dead zone” is a more common term for hypoxia, which refers to a reduced level of oxygen in the water.

To understand dead zones, you first need to know a little bit about oxygen in the ocean. Although humans can’t breathe oxygen underwater, fish and crabs are able to suck up oxygen that is dissolved in the water.

In most areas of the ocean, the concentration of oxygen dissolved in the water is around 9 mg/L, although there can be more or less dissolved oxygen depending on the water depth and how warm the water is.

Most fish begin to feel the stress of having too little oxygen to breathe once the concentration of dissolved oxygen drops below 5-7 mg/L, while hardier crabs and lobsters that live on the seafloor can be comfortable down to 4 mg/L dissolved oxygen or less.

Areas with low-oxygen conditions – known as hypoxia – have dissolved oxygen concentrations of just 2 mg/L or less.

And with such low oxygen concentrations, the fish and bottom-dwelling creatures that normally inhabit the area are forced to move away. 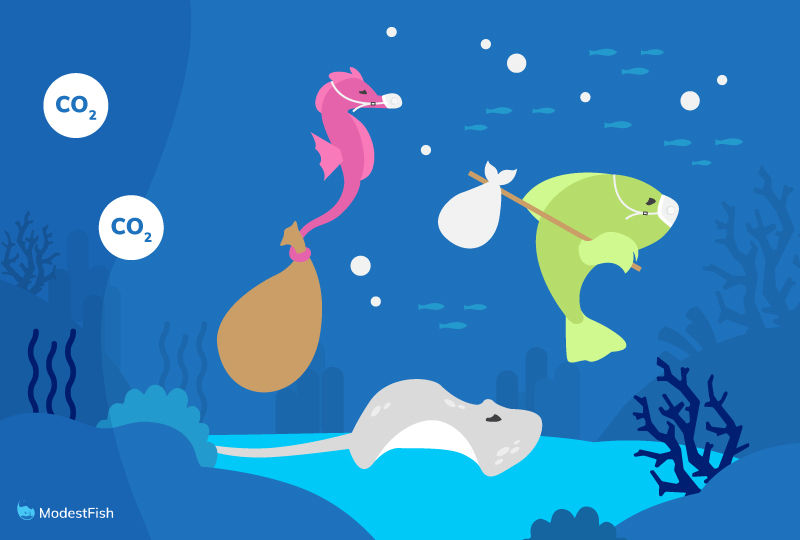 However, if the hypoxic conditions come on suddenly, the result is often that all of this marine life dies on the spot, littering the seafloor with carcasses.

Hence, these zones of hypoxia have become known as “dead zones” and are essentially biological deserts for as long as the hypoxic conditions last

What Causes a Dead Zone?

Oxygen doesn’t just disappear from the water on its own – it gets used up.

These tiny organisms are so abundant in ocean water and the sediment column that it can be hard to imagine – there are millions to billions of individual cells in every drop of water or seafloor mud.

And, like fish and crabs, all of these bacterial cells need to breathe.

The problem comes when these bacteria start breathing faster than normal.

Typically, bacteria are using up oxygen dissolved in the water as they break down organic material – fish poop, fish carcasses, and, most important, dead phytoplankton from the ocean surface.

Most of the time, dead phytoplankton are raining down to the ocean bottom at a pretty slow rate, which in turn limits how much food bacteria have to eat and how much oxygen they suck out of the water.

But when conditions at the ocean surface change, phytoplankton can grow rapidly in a process known as a bloom.

Phytoplankton require two main things to grow: sunlight and nutrients. Under normal conditions, they are limited by nutrients – nitrogen and phosphorous can be hard to come by in the surface ocean, while sunlight is plentiful.

That all changes, though, when humans add nitrogen- and phosphorus-rich fertilizer to fields, which then runs off into rivers and eventually reaches the ocean. 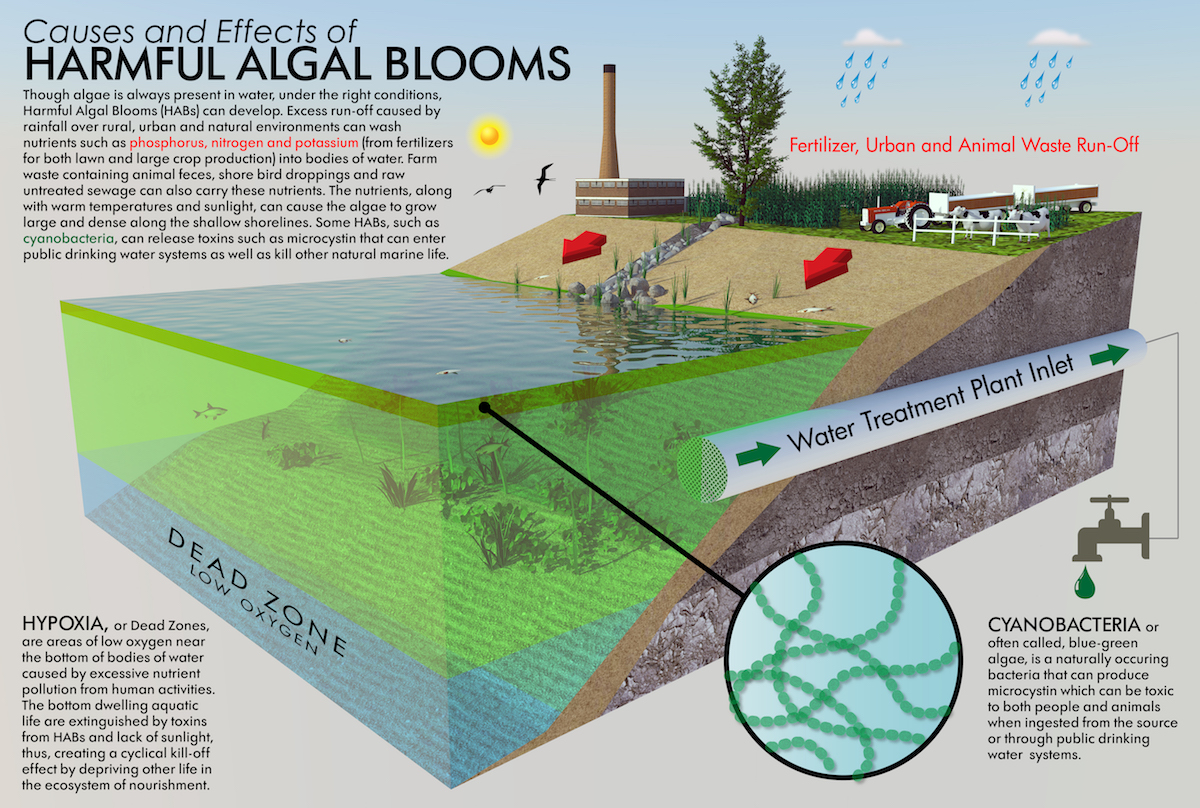 Flooded with the nutrients they have needed to grow, phytoplankton bloom to incredible numbers – and then rapidly die and sink to the bottom.

These dead, sinking phytoplankton are a feast for the bacteria living in the water column and on the seafloor. As they devour the phytoplankton, they simultaneously suck up dissolved oxygen from the surrounding water at an alarming rate.

Worse for fish, bacteria have a much lower dissolved oxygen requirement for survival – they can be perfectly happy at less than 0.5 mg/L, and many types of bacteria don’t mind even when oxygen gets so low that human instruments can’t detect any in the water.

All of this means that bacteria will go on sucking oxygen out of the water, prolonging and worsening the hypoxic conditions, long after fish, crabs, and most other marine life in the area has died or fled.

To be fair to humans, not all dead zones are a direct result of fertilizer runoff setting off a phytoplankton bloom.

Deeper parts of the ocean, where there is no sunlight so that phytoplankton cannot grow, are often rich in nitrogen and phosphorous.

In certain parts of the world, during certain times of the year, this deep, nutrient-rich water rises to the surface in a process known as upwelling – allowing phytoplankton to bloom and setting off the chain reaction that eventually leads to a dead zone.

What Impact Does a Dead Zone have on the Environment?

The overarching impact of a dead zone is that it creates a biological desert, at least in terms of the biology you can see with the naked eye.

Anything that can move – fish, crabs, and lobsters – will typically try to get out of the dead zone towards waters with more dissolved oxygen, while anything that can’t move (or not very far) – mussels, oysters, and clams – will die in place and further fuel the bacterial feast.

However, the effect is the opposite when it comes to microbial communities.

Bacteria, stocked with plenty of food, will grow rapidly and multiply with the species of bacteria that are most prominent in the water column changing in response to the new abundance of food.

Once a dead zone develops, the impact can be widespread as the food chain collapses from a lack of fish to serve as prey for larger marine mammals.

In addition, these coastal regions are often some of the world’s most productive fisheries, so fishermen suffer as the fish population declines or moves outside its preferred habitat.

The cause of the dead zone itself – phytoplankton – can also be ecologically harmful.

The same nutrient runoff that causes the formation of a dead zone often spurs the growth of toxic phytoplankton, which can kill fish and marine mammals that feed on them in surface waters.

These toxic phytoplankton can also be dangerous to humans, both directly by being accidentally ingested when swimming and indirectly by poisoning fish that are caught for food.

Where are the Dead Zones Around the World?

Dead zones can happen anywhere in the world but are typically concentrated along coastlines since this is where phytoplankton are poised to grow as soon as they receive a surplus of nutrients and fish species are most abundant.

A quick look at a map of dead zones will reveal that they tend to form along heavily populated coastlines – again pointing to the impact of human-contributed nutrients to the ocean as the most common source of dead zones. 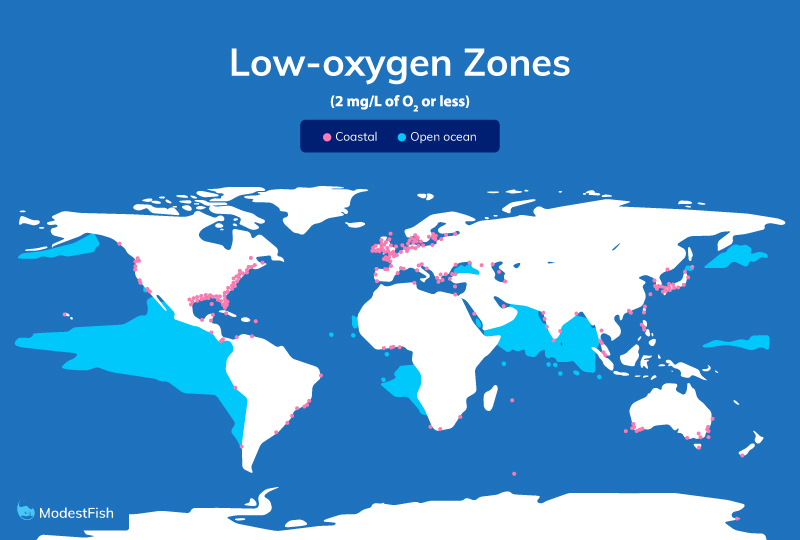 For example, some of the world’s most severe and persistent dead zones are found in the US’s Chesapeake Bay, Great Lakes, and along the Gulf of Mexico coast, regions where there is heavy agriculture and an abundance of industrial pollution into rivers. 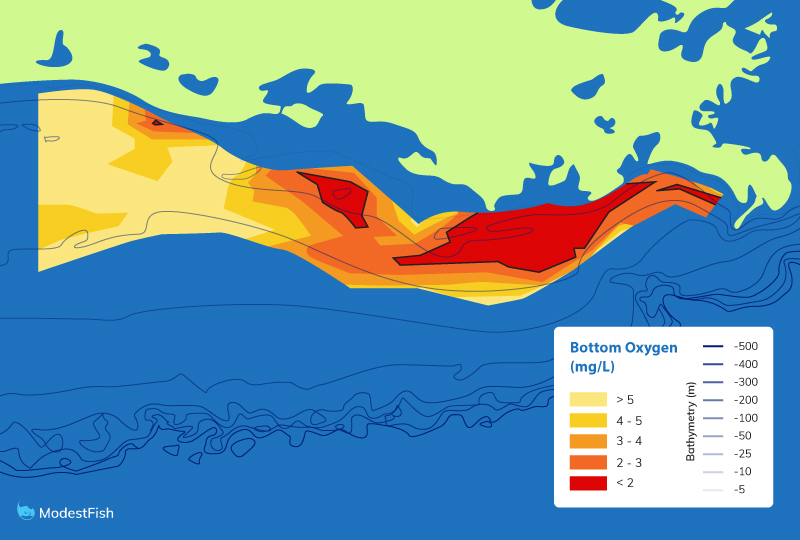 The semi-enclosed North and Baltic Seas, as well as parts of the coast of China, are also affected by dead zones thanks to excessive nutrient runoff from agriculture.

Smaller, less persistent dead zones are also found along the western coast of the US and along Korea and Japan.

While fertilizer runoff very likely contributes to the formation of these dead zones, these are areas of the ocean that experience seasonal upwelling that brings nutrients from the deep ocean to the surface that enable phytoplankton blooms.

Can Dead Zones be Revived?

I have some good news for you…

Dead zones are not necessarily permanent once they develop. After a phytoplankton bloom, the bacteria in the seafloor will eventually exhaust their feast and the dissolved oxygen content of the water will slowly return to normal as it mixes with surrounding oxygen-rich waters through large-scale ocean currents.

A large dead zone in the Black Sea disappeared in the 1990s after a spike in the price of fertilizer limited the amount that farmers were using.

Which in turn reduced the amount of nitrogen and phosphorous running off from fields into rivers and eventually into the sea.

However, that’s not the end of this story…

The problem that the world faces with dead zones right now is the input of nutrients to the ocean has continued.

Leading to more and more frequent phytoplankton blooms that continuously resupply bacteria with more food – which allows them to continually deplete the water of oxygen even as oxygen-rich waters are slowly mixed in.

Around the world, policymakers, environmental groups, and farmers are working togetherto try to place limits on the amount of nutrients that are washed into the ocean.

These collaborations have involved reducing the use of fertilizer, improving wastewater treatment along major watersheds, and monitoring nutrient levels in important coastal areas and bays.

An important caveat is that dead zones are expected to get worse as global ocean temperatures get warmer, since warmer water cannot hold as much dissolved oxygen as colder water.

As a result, dead zones that are not mitigated by reducing nutrient inputs may actually grow in area as the rate of mixing in oxygen from unaffected waters slows into the future.