“Seven wonders” evokes special places and attracts attention. The identification and designation of key natural environments and systems can help to bring attention to them and to their conservation.  Part of a program which also identifies seven natural wonders by continent and country, this is a building block for their protection for the future.  Canada’s Bay of Fundy is on the North America list as is Niagara;  voting for what will be selected as Canada’s list of seven is still open at http://sevennaturalwonders.org/vote-now/  as is the polling for all nations regarding their sites.. A key impact of this approach will be to get the citizens of all countries to consider and maybe nominate the natural places which are most important to them  – from grasslands to mountains to coastal features or special ecosystems.

Seven Wonders of the Natural World

Mount Everest – On May 29th, 1953, two men reached the highest peak in the world. A feat that had eluded realization even after the South and North Poles had been conquired.

The Grand Canyon – Despite being more than a mile to the bottom the Grand Canyon isn’t the deepest gorge in the world, but it certainly is the most spectacular.

The Northern Lights – In Norse mythology the Valkyries would come galloping across the night sky upon their horses equipped with helmets, spears and armor that would glow and shimmer in the darkness. These lights, colored red, blue, violet and green, would spread in curtains from horizon to horizon, amazing the mortals below

The Harbor at Rio de Janeiro – On January 1st, 1502, Portuguese explorer Gonçalo Coelho ship reached a break in the South American seaside that seemed to be the entrance to an enormous river. The bay they found was spectacularly surrounded by huge, oddly shaped mountains that astounded the European explorers. Taking a cue from the date on which they’d found this amazing harbor, they named it the “January River” or Rio de Janeiro.

The Great Barrier Reef – Just before 11 pm on June 11th, 1770, the HMS Endeavour, captained by Lieutenant James Cook, ran aground. Though Cook didn’t realize it at the time, the coral reef he had run onto was part of a vast system of 3,800 coral banks and islands that ran along the coast of Australia. Known as the Great Barrier Reef, it is the largest structure in the world created by living organisms.

Paricutin: The Volcano in a Cornfield – On February 20, 1943, Dionisio Pulido was working in his cornfield just outside the Tarascan Indian village of Paricutin, Mexico, when suddenly a volcano appeared.

Victoria Falls – On November 17th of 1855 David Livingstone became the first European to see the mighty cataract. Afterward he wrote: “No one can imagine the beauty of the view from anything witnessed in England. It had never been seen before by European eyes; but scenes so lovely must have been gazed upon by angels in their flight.” 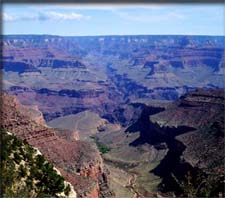 The Seven Wonders of the Ancient World have been around for over a millennium so there is little dispute among people today about what the list should include. The list of the Seven Wonders of the Natural World, however, is a modern list. Who is to decide of all the marvels of nature which are the top seven? Should there even be a top seven or perhaps a top ten makes more sense? 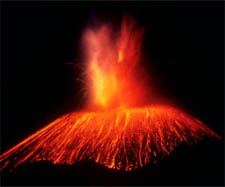 In 1997 the Cable News Network (CNN) put together a list of what their editors thought were the most amazing creations of nature. While some people might dispute certain items on the list, there is no doubt that all of them are astounding examples of ecological wonders. Other organizations have made up lists of the marvels of Mother Nature, but here we present for you the original list put together by CNN.  The related site  at http://sevennaturalwonders.org/vote-now/  listed above attempts to extend the approach to continents and to each country. 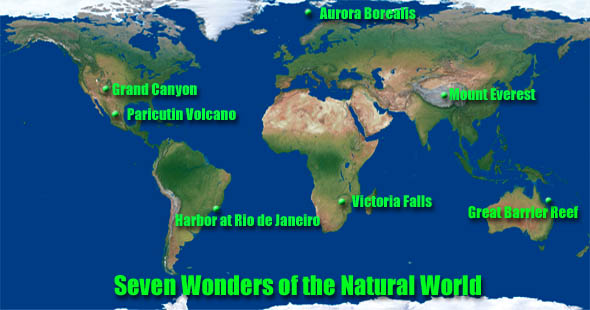