How To Have Your Solar Farm And Keep Your Regular Farm, Too 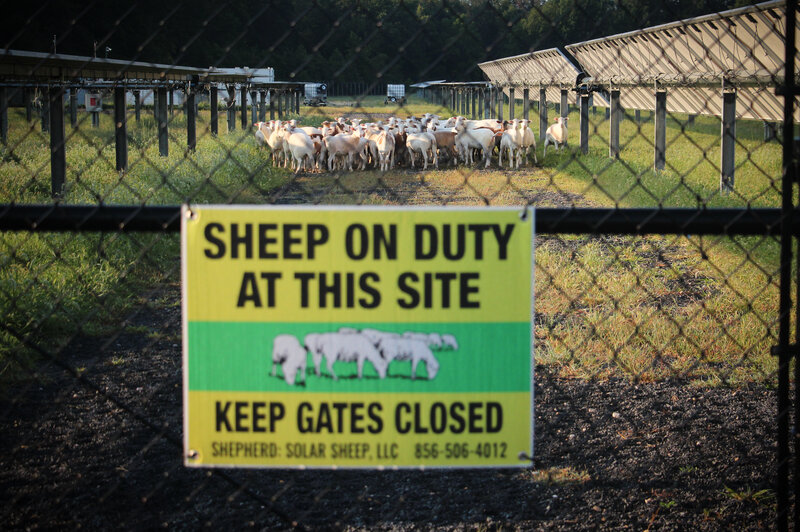 This solar power installation near Vineland, New Jersey, was among the first to replace power mowing with grazing sheep.

Clean, abundant, solar power comes with a price. It requires lots of land, and in some places that’s provoking opposition from people who want to preserve farmland.

In southern New Jersey, for instance, a company called Dakota Power Partners wants to build an 800-acre solar power station, and the Pilesgrove Township planning board is hearing from local citizens who don’t like it one bit.

“The carpetbaggers have come south to take our property, our land, our farms!” protested Jim Davis at a meeting in August. Davis lives next to the proposed solar array. “I’m going to look out of my house, my living room windows, I’m going to see sixteen feet of solar panels.”

Many opponents are upset at the idea of solar panels replacing fertile, productive, farm fields.

“We’re a farming community,” said Cheryl Reardon at the same meeting. She’s a former member of the planning board. “You were the first town to adopt a right to farm ordinance! Don’t forget your vision for this township, and what it should remain to be!”

Zaid Ashai, CEO of Nexamp, a solar company based in Boston, says this is a pretty common reaction. “I think the biggest community opposition is purely [based on] how the land looks,” he says. “When people see projects that change the way the landscape has looked for potentially a hundred years or more, there’s a reflexive reaction. That’s human.”

But Ashai believes that farming and solar can be friends. For small farms that are struggling, leasing land to solar companies can be a financial lifeline, helping them survive. Farmers can earn a thousand or more dollars per acre per year from these deals.

Ashai and others are also exploring ways to capture the sun and still farm the land–though perhaps with a different kind of farming. 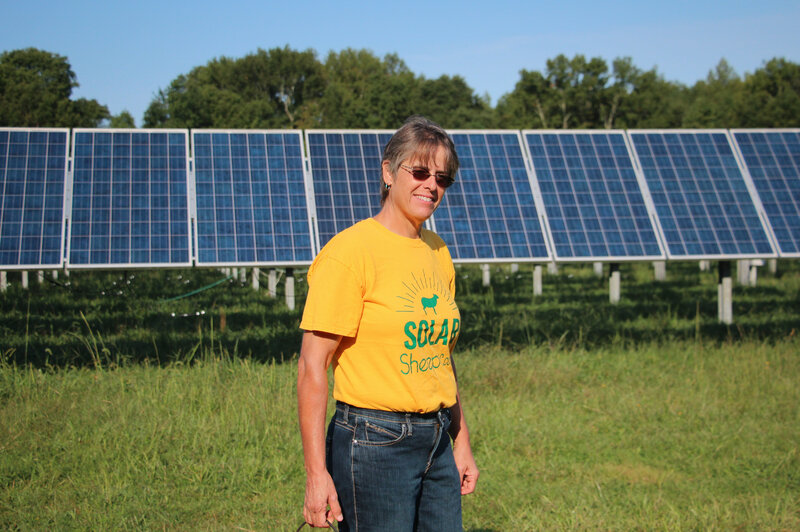 I recently saw an article about how this solar farm is going to take away food for people,” Julie Bishop says. “I thought to myself, since when is lamb not food?”

Julie Bishop is one of the pioneers in this movement. She got involved more or less by accident a few years ago. She had begun raising sheep on a small farm in Newfield, New Jersey, but didn’t have a lot of pasture land for them. One day, as she was driving to visit her mother nearby, she passed a 15-acre solar installation.

“I thought, that would be a good place for my sheep,” she says. “It’s all fenced in, and I’m sure they’re paying somebody to mow the grass.” She figured sheep could do that job more easily. “They’re just born to weed-whack,” she says. “Let sheep do what they’re good at, let people do something that’s, you know, not so back-breaking.”

She got in touch with the solar company, made a deal, and now she’s getting paid to graze her sheep there.

“It really does work,” Bishop says. There’s plenty of grass and clover for the sheep. (The sheep prefer the clover.) From there perspective of the sheep, wandering around underneath the panels, it’s just a nicely shaded pasture. “All kinds of critters live in here. Mice and moles and voles,” Bishop says. “It’s food for butterflies and other pollinators.” 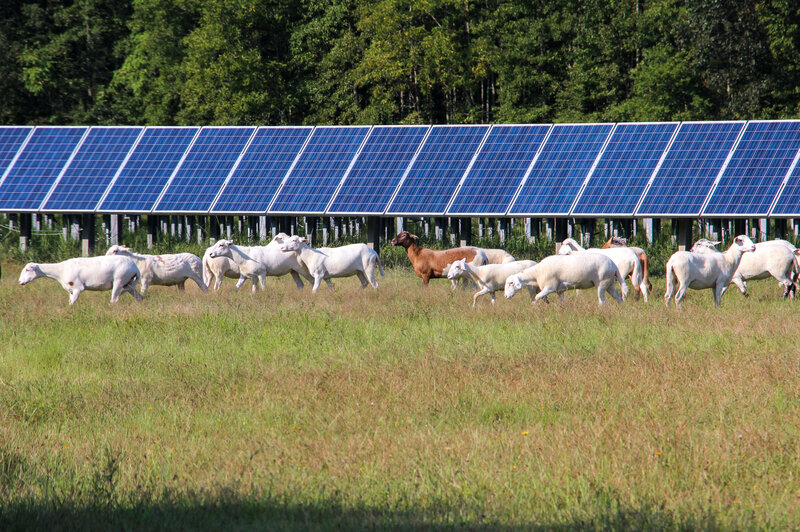 Several solar companies have allowed sheep to graze. Others are inviting farmers to grow vegetables under their solar panels.

Bishop renamed her farming operation Solar Sheep. She now has flocks of the animals at three solar sites around New Jersey, and her herd might soon double in size to handle the proposed solar plant in Pilesgrove township. Dakota Power Partners is designing the project with sheep in mind, and will include a barn for Bishop to use. The company is highlighting this in its efforts to get approval for their project.

Others have had the same idea. They’ve banded together to form the American Solar Grazing Association. Nexamp’s Zaid Ashai says that Nexamp has sheep at a few of its sites, but it’s also investigating other ways to combine solar energy and farming. “We still have not even scratched the surface on how to integrate agriculture and solar power plants more closely,” he says. He says beekeeping is an obvious option.

Boston-based BlueWave Solar, meanwhile, is about to start construction on dozens of projects in Massachusetts that will combine solar with vegetable farming. The state government is offering financial incentives for such projects. 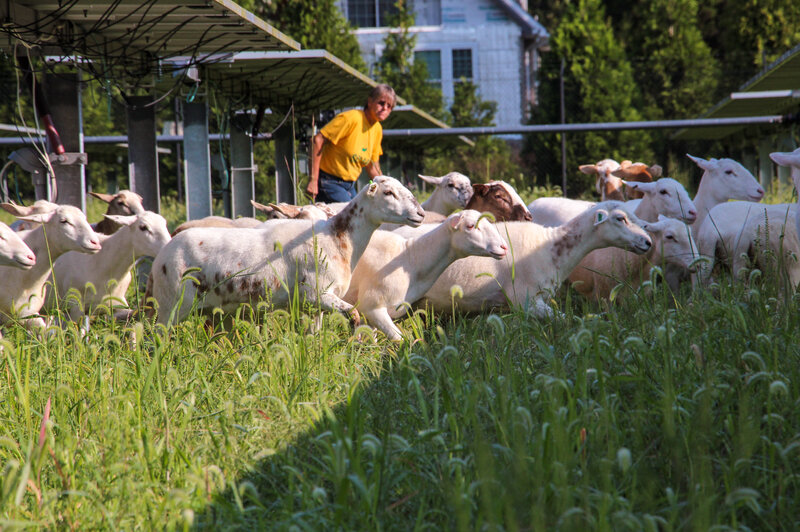 Julie Bishop raises the Katahdin breed of sheep, which have hair rather than wool.

“It’s an exciting time,” says Lucy Bullock-Sieger, the company’s director of civic engagement. In order to qualify for the state subsidies, the solar panels in such projects have to be built at least eight feet off the ground, allowing easy access for farmers and their equipment. Bullock-Sieger says the company is working with farmers who plan to grow pumpkins, strawberries, butternut squash, and cranberries.

At the University of Arizona, researchers found that certain varieties of tomatoes and peppers actually grew better when partially shaded by solar panels.

They have a name for this combination: Agrivoltaics.

Note that efforts to have multiuse for land with solar collectors has been done for many years – with solar panels on top of parking structures in Europe and the Middle East to provide both shade and power, use of panels to shade crops which need shade and integration into irrigation systems.