Joy followed by despair is our tragedy but also our hope, for the worst of times, like the best, always pass away.     Boethius, The Consolation of Philosophy 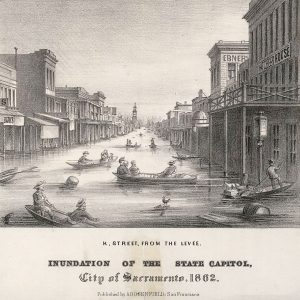 The Biblical Flood That Will Drown California

I read the headline above yesterday and thought: “Give me a break – yet another exaggeration.” Then I read the article and said: “Oh SH–.” https://www.wired.com/story/the-biblical-flood-that-will-drown-california/

“The historic 1861-62 floods that transformed much of the Central Valley and Los Angeles Basin into an inland sea. Floodwaters covered a region of the Central Valley 250 to 300 miles long and about 20 to 60 miles wide. It will happen again. To see what it would do to modern California the scenario was dubbed ARkStorm — named for Atmospheric River 1,000 Storm — awas published in 2011 after input from more than 100 experts from public and private sectors. The scenario envisions a pounding of California by a series of “atmospheric rivers” — long plumes of water vapor that can pour over the West Coast and hold as much as 15 times the liquid water flowing out of the Mississippi River’s mouth. The result? $725 billion in damages, as a minimum [For comparison, the most costly natural disaster in modern US history—Hurricane Katrina in 2005, racked up $166 billion.] Emerging science demonstrates that floods of even greater magnitude occurred every 100 to 200 years in California’s precolonial history. Climate change will make them more frequent still. In other words, the Great Flood was a preview of what scientists expect to see again, and soon. And this time, given California’s emergence as agricultural and economic powerhouse, the effects will be all the more devastating.” 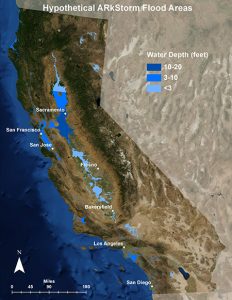 So What? We don’t live in California. But of course in today’s world we are connected in so many ways. The most basic effect for us would be food: the Central Valley produced 25% of all food in the USA – and we import much of it to Canada. The other problem is this: these kind of periodic disasters are actually normal and part of Nature. We once thought that “normal” life was stable and that “disasters” were the exception.  Now we are discovering that it is quite the opposite: periodic disaster – be they plague, war, fire, earthquake, invasive species, ice ages, etc. are normal. Not every day, but often, and random enough, that we should be including them in our worldview.

But we don’t. We live as if peace and tranquility will always be and we generally do not prepare for events outside our everyday experiences…until disaster strikes. Then we react. Then we find somebody to blame. Then we panic. Then we say: “But nobody told me. How was I to know?” Well, the fact is, life is dangerous. In the past that was obvious and people knew that danger lurked around every corner and behaved accordingly; no wimps allowed. Today our focus is safety. Everything must be safe. We must remain in our Covid-19 bubble. Drive 40 km/h through town. Be anxious. Be scared of climate change. Scared of Trump. Scared of… well, keeping people afraid is the best way for them not to complain too much and demand change.

What we need is not fear. What we need is not denial of the real risks that exist. What we need is to become comfortable with danger and also prepare for it. Risk is what makes life worth living. Isn’t it odd: when in a dangerous situation we feel the most alive: mountain climbing, bicycling too fast down a big hill, cutting down a tree with a chainsaw… Here is the traditional risk framework. Most of us focus on high frequency/high impact [red] – instead, in this age of change and turmoil we should be focussing on quadrant labelled ‘black swans”. Of course these are the unknowables= – these so-called “black swan” events – but are they really? 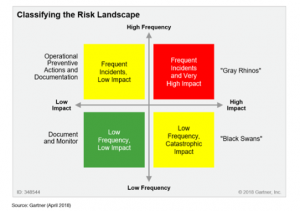 We once thought the 1861 flood was a black swan event.. But you now I think not. We know that 1861 flood repeats every 150-200 years. People were just ignorant or in denial. [the native Americans moved to higher ground well before the flooding got bad and told everybody else to do so as their oral traditions warned of such events… they were, of course, ignored]   So our preparations should mostly about being robust, about being adaptable, not about being safe, because life is never safe – it is always dangerous. Ask my wife’s friend who slipped on a toy car left on a stair by her young son: she has spent the rest of her life with back pain. The Ancient and Medieval  worlds knew this better than we do. Case in point: what was a top seller for over 1000 years after the fall of Rome? The Consolation of Philosophy by Boethius, translated by both Alfred the Great and Queen Elizabeth I into English so they could have it by their side to help them through the hard times they experienced.

In conversations with Boethius, who is in a dungeon, the incarnation of Philosophy, a wise woman, has the primary aim is to get Boethius to reconsider his relationship with Fortune. She begins by asking him why he trusts in such a “monster” to begin with. Since change is the very nature of Fortune, after all, nothing she offers can be relied upon. Moreover, Philosophy points out Boethius has already had an ample share of the good things Fortune can provide, including wealth, prestige, and a happy family life. It was inevitable that, according to Fortune’s own changeful nature, he should fall from this high position at some point. One by one, Philosophy leads Boethius through the different gifts of Fortune—wealth, high office, fame—and shows none of them can confer true happiness. To the contrary, those who have money often fear losing it, and those who hold prestigious public offices must defend themselves from enemies. What good, Philosophy asks, is a gift that stirs up so much anxiety? Those who seek such worldly, external forms of success are debasing themselves and turning their backs on what makes them truly human.

So, in conclusion, what can you do? What is your philosophy to get you through the tough times. Do you live your life knowing it is dangerous? Do you prepare for danger? Do you, knowing all this, still live a full and rich life by not shrinking from challenges and not only focussing on being safe – because that will make you ‘asleep at the wheel’ when you focus on safety as a first priority. Go for it! Go mountain climbing – just make sure you have excellent training and a great harness.