17 November 2016 – At the United Nations Climate Conference (COP 22) under way in Marrakech, the Food and Agriculture Organization (FAO) participated in the launch of a ground breaking map of restoration opportunities to combat climate change in Africa, an area being called the ‘Great Green Wall.’

The map is based on a collection and analysis of land-use information in Africa’s drylands in order to improve resilience to climate change.

“The Great Green Wall initiative is Africa’s flagship programme to combat the effects of climate change and desertification,” said Eduardo Mansur, Director of the FAO’s Land and Water Division, as he presented the map yesterday during a high-level event at the 22nd Conference of Parties to the UN Framework Convention on Climate Change (UNFCCC).

During the event, held at the African Union Pavilion on the theme ‘Resilient Landscapes in Africa’s Drylands: Seizing Opportunities and Deepening Commitments,’ Mr. Mansur explained that so far, the Great Green Wall initiative has shown that degraded lands can be restored, but “these achievements pale in comparison with what is needed.”

According to Mr. Mansur, the tools used to create the map are vital in providing critical information to understand the true nature of restoration needs throughout drylands in North Africa, the Sahel region, and the Horn of Africa.

Through the Global Drylands Assessment, a study conducted by FAO and its partners from 2015-2016, an estimated 166 million hectares of the Great Green Wall area offer opportunities for restoration projects. 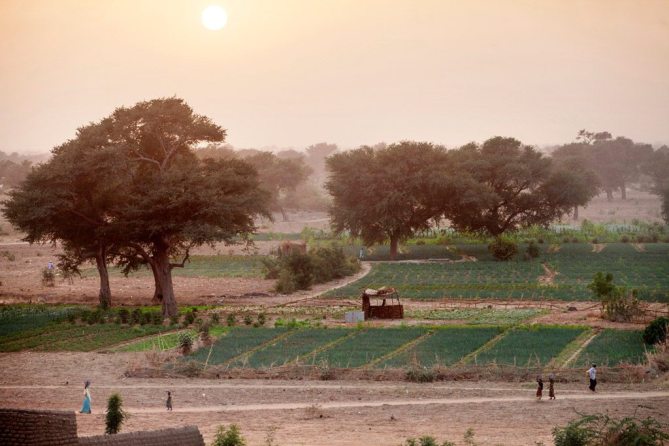 The Great Green Wall for the Sahara and the Sahel Initiative supports local communities in the sustainable management of drylands. Photo: FAO/Giulio Napolitano

The Great Green Wall covers both arid and semi-arid areas in the north and south ends of the Sahara Desert. Its core area consists of 780 million hectares and is home to 232 million people. In order to halt and reverse land degradation, some 10 million hectares must be restored each year. Such an achievement would provide critical support to the 2030 Agenda for Sustainable Development.

A variety of restoration approaches are possible and necessary in order to implement the Great Green Wall initiative. These include natural regeneration that allows farmers to protect and manage the natural regeneration of forests, croplands and grasslands; large-scale land preparation and enrichment planning, especially in areas where degradation is severe; mobilization of high-quality seeds and planting materials; and involving communities in the selection of native species to be used.

In areas closer to the desert, sustainable management of oases systems and use of native woody and grassy vegetation can help fight sand encroachment.

The data collection is a collaborative effort on behalf of FAO, the African Union, the CILSS/AGRHYMET Regional Centre, the Directorate General of Forests in Tunisia, Addis Ababa University in Ethiopia, Google, and the World Resources Institute. 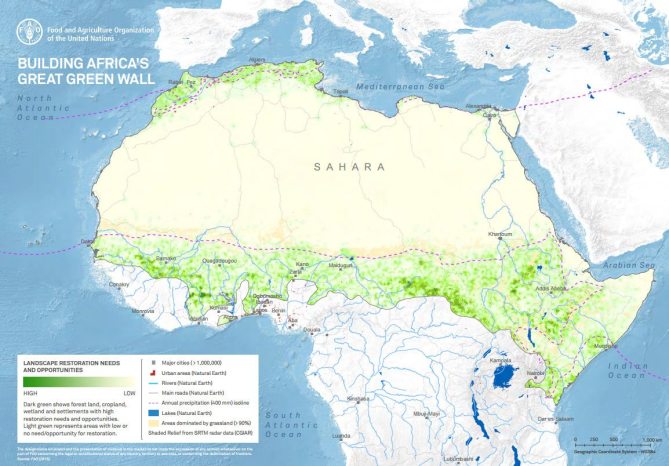 The map itself was made possible due to support from Action Against Desertification, an African, Caribbean, and Pacific Group of States initiative to support the Great Green Wall programme, as well as national UN Convention to Combat Desertification (UNCCD) action plans and south-south cooperation, FAO, and funding from the European Union.