Key indicators of how humans are changing the Earth:

The most recent addition is at the bottom.

Click on each link to see the latest data.

“Sea level rise is caused primarily by two factors related to global warming: the added water from melting ice sheets and glaciers and the expansion of seawater as it warms. The first graph tracks the change in sea level since 1993 as observed by satellites.”

Species at risk of extinction

“By the end of the century, half of all species could be facing extinction. The rate of species extinction is up to 10,000 times higher than the natural, historical rate.”

“This table presents the most up-to-date, daily average reading for atmospheric CO2 on the planet.”

Values for each year have been increasing at an ever-faster pace since the record was started in 1958.

“Scientific analysis on Arctic sea ice conditions. We provide an update during the first week of each month, or more frequently as conditions warrant.”

The summer of 2021 has been well below the long-term average, though not the lowest ice cover on record, which was in 2012.

“The chart illustrates how the world population has changed throughout history. ”

“Maximum and minimum temperatures, plus maximum precipitation, in the last 24 hours. Data can be sought globally, by region, and by country.  The most intense heat waves and storms can be located.”

On 28/29 June 2021, despite heat waves in North America, Siberia, and the Punjab provinces of India and Pakistan, the area around the Gulf of Arabia has the hottest temperatures, well above 50 °C.

The map shows the real-time air quality for more than 10,000 stations around the world based on fine particulate matter (PM10 and PM2.5), nitrous oxide, sulfur dioxide, ozone, and carbon monoxide.  The highest local values appear on top of other nearby stations.

28 August 2021 was a particularly bad day for people in Las Balsas-S. Andrés y Sauces, Canarias (Canary Islands), with an AQI of 835, but the pollution (high PM10) appeared to be very localized.

Coloured bars show average temperature by year (blue is cooler and red is hotter than the 1971-2000 average) globally, by region, and by country.  The records are also available as stripes for each locale.

We have really been heating up our Earth quickly since the end of WWII.

A draft of the IPCC’s AR6 WG1  Summary for Policymakers had a figure “which aimed to put recent changes in carbon dioxide, global temperature, and cherry-blossom-blooming date into a longer context of changes over the past 2000 years, and to show how other climate metrics have changed in recent decades. Many of these time series are shown in disparate places of the report, and brought together in this graphic which also indicates key milestones and discoveries in climate science.”

Racing bars show how emissions by country changed over the last century and a half. The countries in which the Industrial Revolution began were initially the biggest emitters, and that legacy persisted until recently. Now, with the Second Industrial Revolution (Tech Revolution) and globalized trade, emissions have been shifting to other countries. However, the United Sates of America remains mainly responsible for the carbon dioxide in our atmosphere.

As of 2021, there are many electric vehicles (EVs) available in Canada.  This spreadsheet provides some comparative data for them, including range, price, acceleration, delivery time, and more.

Technology continues to improve and options continue to increase as manufacturers move away from internal combustion engine (ICE) vehicles. 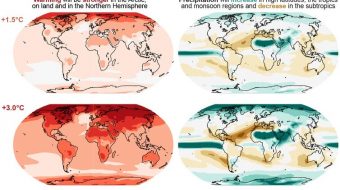 Floods around the World

FloodList shows news and information on the latest flood events from around the world.  It receives funding from Copernicus, the EU program for monitoring the Earth’s environment using satellite and in-situ observations.

From arrival at the European Space Agency’s launch Facility in Kourou French Guiana, through launch and deployment, the pages linked here are your starting point for exploring Webb’s launch and commissioning.

One person found a lot of misinformation out there about pollution generated by electric vehicles (EVs), so he spent over a year researching this and was shocked to find out what actually goes into producing the gas we burn in our cars every day.

What People Pay for Energy around the World

Prices depend on local availability, competition, corporate greed, and government policy.  They vary from a few pennies per litre to almost US$3.  In most major fossil-fuel-producing countries, prices are low.  The link includes prices for gasoline (petrol), diesel fuel, natural gas (methane), liquified petroleum gas (LPG), kerosene, heating oil, ethanol, and even electricity (per kWh).

Indicators of Well-Being in Québec

The premise of the process was to recognize and reinforce the interdependence of the economy, society and the environment.  One pillar is not adjacent to the other, they are connected to each other.  By developing measurable indicators that take the pulse of each pillar, and thus go beyond a single monetary measure of progress (GDP), we are able to recognize this dynamic in a consistent and systematic way.  The indicators therefore allow governments to be more effective in monitoring the various pillars and in taking actions to develop a prosperous, inclusive and green Quebec.  The lack of frequent reporting regarding these pillars limits the public’s ability to hold our policymakers and other various actors accountable for the results of their actions on important aspects to the daily lives of Quebecers.  By having at our disposal a broad range of indicators that measure society’s progress, we ensure that collective well-being and quality of life increase as inclusive for all of Quebec.

Daily melt extent mapping for Greenland Ice Sheet has resumed (as of April 2022), while mapping for the Antarctic Ice Sheet has suspended for its winter season.  Calibration of yearly melt detection requires analysis of the springtime snow conditions by a separate program. See our March 18, 2013 post for more discussion of melt calibration.  A full analysis for the 2021-2022 melt season on the Antarctic Ice Sheet will be coming soon.

Explore an interactive diagram to learn more about the carbon cycle.  After opening the link, click on the different labels to view short video clips or images about different parts of the cycle.